After thumping out my post of Things That Make Me Smile, I of course thought of many more things. As you do.

But one thing, or person, who makes me smile, in fact, makes me grin with bursting pride, is my eldest son MJ.

Disclaimer: The little one has the same effect on me although for different reasons.

When MJ was 12, he came to me looking a bit nervous and with a very serious look on his face, not to mention all the other body language that was going on and told me he needed to talk to me.

We had had a tedious year, for want of a better word. I had recognised that this was probably due to puberty creeping into our otherwise peaceful home and had duly done copious amounts of reading on the subject. But generally, things were still OK.

I had noticed on this occasion my usually outspoken, confident, articulate son was taking a bit of a back seat it seemed; so I was immediately on alert. I became very concerned as terrible scenarios started to play in my mind. He NEEDED to talk to me! Oh.My.God., what could be so terrible that not only was my usually very talkative son preempting his need to talk to me, but he looked so terribly worried?

I took a very deep breath and tried to clear my mind, which had already come up with at least 20 awful things that might have happened or might be about to happen.

Being a bit later in the night and with his brother asleep in bed, I asked him if he would like a hot chocolate, and so we both had one and we sat on opposite sides of the kitchen bench facing each other. Our usual positions to engage in open, honest communication. It was difficult, but I tried to do more listening than I am at times known for, because I knew whatever this was, it was important and I needed to give him my full attention.

And there it was, after much uncharacteristic small talk, hypotheticals, facts and talk of statistics and research already done, the words finally came.
"Mum, I am gay."

NOT, I think I might be, or I am not sure but, nor was there any hesitation or quiet voice. Right from the very first time my son had said those words out loud, he was a proud gay man! I immediately knew he would be OK.

I already knew he had it in him to have the maturity, confidence and self esteem to be whoever his path in life would make of him, but I was glad to hear with those four words that he knew who he was!

I don't know if that makes me a proud gay mother, but however the sequence of words, the most valuable of them all is proud.
﻿ 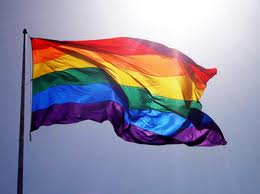 Gay Pride Flag
The colours represent: Red for life, orange for healing, yellow for sun, green for serenity with nature, indigo for harmony and violet for spirit.
It turns out his nerves were for me, he was worried about me, not what he had to tell me, nor really my reaction and I am still not sure if he thought I would feint or have a heart attack, but I hope he never for even a split second thought there would be anything negative in this news to me. Because I am proud of him. I am proud he can stand up and be counted for who he is, that he is already advocating for the GLBTIQ (Gay, Lesbian, Bisexual, Transgender, Intersex, gender Queer or Questioning) Community, that he is making friends across all walks of life and most of all, that he is following his heart to be the best person he can possibly be in all areas of his life.

I told him that while I was intrigued that we had never before really touched on the subject, I was actually not very surprised, you see, he is my son and I love him and as a result of having spent a lot of time with him those previous 12 years, I had sort of got to know him. As you do. He then informed me that he had been feeling this for a year, so he knew when he was 11 that he was gay, but because of societal attitudes, he had not know what to do with that information, hence our "tedious" year. 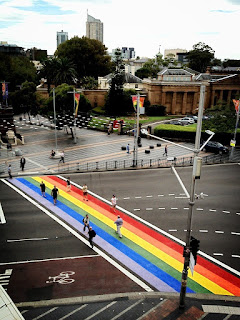 Rainbow Pedestrian Crossing on Oxford Street near Taylor Square Sydney
Today as I write this MJ is nearly 16 and is at Mardi Gras under the expert supervision of an organisation that has lent its support and provided valuable services within the GLBTIQ Community for some thirty years!  He is with friends, advocates, professionals and people who support not only the GLBTIQ Community, but the Youth of that Community, he is with twenty10.

As I dropped him at the train station, I admitted to him it was freaking me out sending him on his way to Mardi Gras, but I also told him how proud I am of him, also, how to not drink any water unless he knew exactly where it had been, how to stay together, how to wear his rain poncho and not get too wet, and most of all, to have a wonderful time and enjoy himself as any 16 year old should be able to do dressed as a dinosaur!
Posted by Unknown at 17:41