It's Time To Change The World

I am going to tell you right now, this post will be longer than my usual posts. It needs to be.

I need to tell you a story, a complete story, because Changing The World is not something any of us should take lightly.

This story is ultimately about a Murder that took place on the 12th of January 2013 in a town in Maryland USA, a Murder for which nobody has been held accountable because the victim was disabled, and because of his disability deemed "Already Compromised".

In short, a young man, who happened to have Down syndrome, went back into a movie theatre to watch for a second time a movie he had just seen, but he did not have a ticket for a second screening. 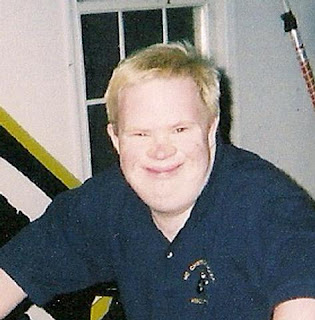 ﻿
Source
Due to the fashion in which security dealt with this issue, within half an hour,
Robert Ethan Saylor was dead.

The mention of Changing The World is initially in reference to my blog post written for World Down Syndrome Day 2013 where I talk about educating the people outside of the Down syndrome community, about Down syndrome (DS).

When I wrote that, I was not aware of this crime, so the extent of that post was not far reaching enough to have ever thought that I might have to consider the type of education that might prevent a death. And that, in itself, is far too big a solution to include here.

And changing the world now seems much more important!

I was however, not simply meaning education about basic facts like the medical terminology for DS is Trisomy 21, nor just that there is an extra Chromosome on the 21st pair, not just that people with DS are as different to us as they are alike, I was eluding to more relevant information. The type of information the greater community will need if they are to truly include people with DS.

What I did not say, and again, I made the error that people would know this, is that most people with DS take longer to process information, their brains work beautifully in many ways, and from my experience, they are usually great problem solvers and make wonderful Personal Assistants, as once they grasp a concept or an idea or a memory, they rarely forget; but they need a bit more time to learn, to consider and process a conversation or instruction, or to think about their own response.

What does that mean to us? How can we be more inclusive in this type of situation?

When I speak to my son, who has DS, I have to be more patient, I need to wait, to give him time to think about what I have said, to process that information before he will respond or react to what I have said.
Time that Robert Ethan Saylor was not given.

Most people with DS have difficulty with what is called "Transition", which is simply moving from one task to another or even one place to another.  Not only is the processing time for the change a consideration but they want to know what next? Which comes down to a difficulty with scheduling or planning, so I often use visual communications such as signs or photos, as people with DS learn very well via visual methods, as do many other people.

Again, what does that mean to us? How can we be more inclusive in these situations?

Taking time is of the essence, ensure the person with DS understands that the time has come to move on from the task at hand and be sure they understand what is next.
An understanding Robert Ethan Saylor was not afforded.

Now tell me, how are these courtesies any different (other than it may take a little longer) to what you would expect for yourself? We demand the rights we feel we deserve as Human Beings, and so those should carry over for all Human Beings.

We use the word INCLUSION because people with DS and other disabilities want to be included. Do we think it is enough to just "allow them to exist"? Do we not realise still, how much every person has to contribute to this world? The fact that we are all different to each other is what makes this world such a rich place.


Robert Ethan Saylor was no different to any of us,
he wanted to live.

He would have wanted to do things that he enjoyed, to be able to have a life where he could have choice, friends, spend time with family or go see the odd movie. So he did, he went with his Carer to see a movie, but as a result, he is dead.

WHY?
There seems to be many reasons procedurally that Robert died, but the State's Attorney For Frederick County at the County Court House in Frederick Maryland says this in their press release:

The opinion of the Office of the Chief Medical Examiner was that a 25 year old Caucasian male, ROBERT ETHAN SAYLOR, died of ASPHYXIA, Down's Syndrome, Obesity, Atherosclerotic Cardiovascular Disease and Accessory Conduction Pathways of Heart are also significant conditions ... This individual was already compromised by his Down's Syndrome, obesity, body habitus, and heart disease, making him more susceptible to sudden death in stressful conditions which would compromise his breathing. Using the medical definition of homicide (but for the actions of other individuals Mr. Saylor would not have died), the manner of death is best certified as HOMICIDE.

And AGAIN, I ask, What does this mean to us?

Firstly, it means Robert died as a result of other people's actions!

Secondly, YOU CANNOT DIE SIMPLY BY HAVING DOWN SYNDROME!

Thirdly, Robert had Down syndrome NOT Down's Syndrome (but you would think a Medical Examiner would know that).

Finally, AND THIS IS THE PART YOU WILL BE INTERESTED IN, all the medical conditions mentioned above, as with any of the characteristics of DS, can be found in the general population. They are not unique to a person with DS.

In short, this could have been your Son, Daughter, Mother, Father, Uncle or Aunt who just happens to have similar health problems, who may have simply been confused or maybe didn't understand the request made of them, maybe their English language skills were not so good, maybe they had difficulty hearing ... this could have been anyone.  The fact that Robert had DS is completely irrelevant given the methods used to remove him from the Cinema, and yet, his death is being blamed on him having Down syndrome.

Had anyone else with similar medical conditions been hog tied with three sets of hand cuffs and left to lie on the floor face down in a panicked state, they could have also died, but their death would NOT have been blamed on Down syndrome! In fact there are many incidents previously of people who have died in similar situations at the hands of others, who did not have DS.

My heart breaks for Robert, for his family and friends and for the community that had embraced him, as I hope one day will be the experience my son can fondly look forward to, but to ensure complete inclusion, we must continue to fight for the rights of those who need our support.  We must also fight for justice for Robert and ultimately ANY person who might find themselves in that same situation.

Down Syndrome Uprising has also written about this story and have started this petition.  Please sign it, take a stand for Robert and Human Rights! 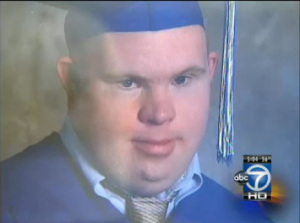 ﻿
Source
As I am in Australia, I am not sure what else I can do, but to show my support from afar which hopefully makes this an Internationally supported incident and in the hope that may help keep the fight for justice for Robert and Human Rights going world wide.


WHAT CAN YOU DO?
This link will take you to information outlining what you can do!
DO IT NOW ...﻿

There have been many people write about this tragedy, people who are parents of children with DS just like me. People who are articulate and who write heart felt words like these Make World Down Syndrome Day a Day of ACTION, Death by Down syndrome, We Stand in Solidarity, Abuse (and Murder) of People with Special Needs Has To Stop! and this The Sound of Terror.

You will excuse me if I cannot find a Happy Ending in this post, however, if Robert's killers are brought to justice, that would do it for me.


The hope of a secure and livable world lies with disciplined nonconformists
who are dedicated to justice, peace and brotherhood.
Martin Luther King, Jr.﻿
Posted by Unknown at 01:32