It came to pass that on this day, in fact it was yesterday, we went on a family outing!

And to acknowledge the Easter long weekend and many of the celebrations held by religious people amongst us, I gave my blog the title you see above!
Apparently it is a very religious term appearing some 452 times in the Bible and a staggering 1424 times in the Book of Mormon. Fun fact for the day ... done.
The family day out idea all began with LJ, refusing to go to sleep of a night unless I sang a rather large repertoire of songs to lull him off.  As I had been to a wedding over that weekend prior to this behaviour starting, which I wrote a heart wrenching piece about here, it was very easy for him in that initial stage to use my guilt against me.
How DARE I go away for 48 hours and NOT take him!
I decided after many nights of impatience and him trying to string it out further and further, that I had to put a stop to it. The other option I had been considering was recording myself on his iPad so I could play him videos of me singing for 15 - 30 minutes ... I decided to break the back of it and not perpetuate a cycle of behaviour.
Out came the trusty "STAR REWARD CHART"!
First came the "BED", "READ BOOK", "SLEEP" visuals, with the reward of a train ride if we managed to acquire THREE STARS for going straight off to sleep after his book! 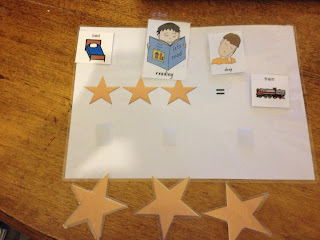 Keep in mind, I was at the end of my tether. This had been going on for a month.
Three days, THREE DAYS! THAT, was all it took!  Obviously, I had been played.
While I am on a roll, I thought, let's go for the "STAY IN YOUR OWN BED AT NIGHT AND DON'T COME INTO MUMMY'S BED". Or was I kidding myself? 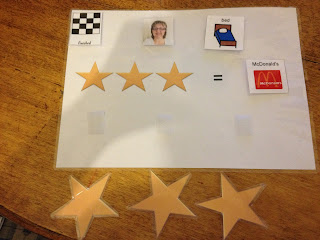 Seems he loves McDonald's more than he loves me! THREE DAYS!
SMACK DOWN!!!
So of course, we all know, star charts don't hold any value, unless, you carry through.
So off we went yesterday.
We caught the train! 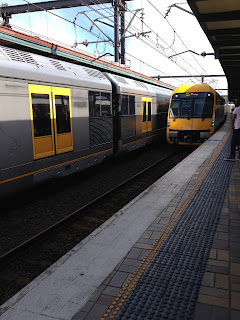 We caught the Ferry, 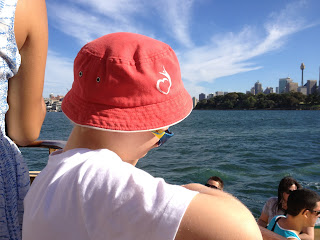 we ate chips on the Corso!
﻿ 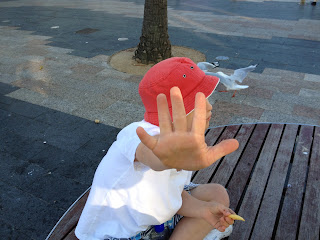 And of course, when all was said and done, we had a look at the beach ... how can you not?﻿ 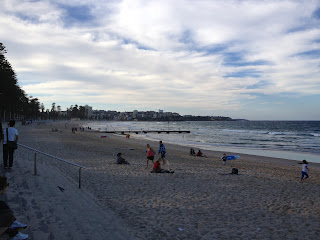 It was at this point when we were all exhausted and ready to go home, we wandered back up the Corso, got on board the Ferry that would take us back across the Harbour and on to the train that would eventually have us home.
We are truly lucky to live in such a beautiful country, and to be able to finish the day with such a beautiful view ... 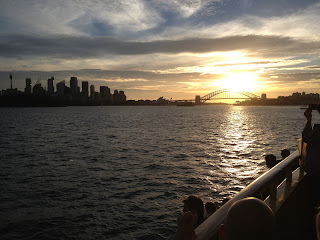 And so it came to pass, that on the seventh day, he rested!

I hope you all have a lovely Easter with friends or family (or both) and if you haven't already, take advantage of Monday, and have a day out in our wonderful country!

My Happy Ending: We had a wonderful day and made some magical memories.

Where is your favourite city in the world?﻿
Posted by Unknown at 22:42